New Delhi : Sahitya Akademi has selected 22 writers for the Sahitya Akademi Bal Sahitya Puraskar 2019 and 23 writers for Yuva Puraskar 2019. The Executive Board of the Akademi that met in Agartala today, under the Chairmanship of its President, Dr. Chandrashekhar Kambar approved the selection of awardees. The Union Minister for Tourism and Culture (Independent Charge), Shri Prahlad Singh Patel congratulated the award winners. The awardees have been selected on the basis of recommendations made by the Jury comprising of three members each in the concerned language, in accordance with the rules and procedure laid down for the purpose. According to the procedure, the Executive Board declared the Awards on the basis of unanimous/majority vote by the Jury. Award in Maithili will be declared on a later date.

For the Bal Sahitya Puraskar, the Awards relate to books first published during the five years immediately preceding the year of Award (i.e. between 1 January 2013 and 31 December 2017). However, during the initial ten years i.e. from 2010 to 2019, the award may also be given to an author based on his/her total contribution to Children Literature.

Meanwhile, eleven books of poetry, six of short story, five of novel and one literary criticism have won the Sahitya Akademi Yuva Puraskar 2019. The Award relates to books published by an author of the age of 35 and below as on 1st January of the year of the award.

The Award in the form of a casket containing an engraved copper-plaque and a cheque of Rs.50,000/- will be presented to the awardees at a special function to be held at a later date. 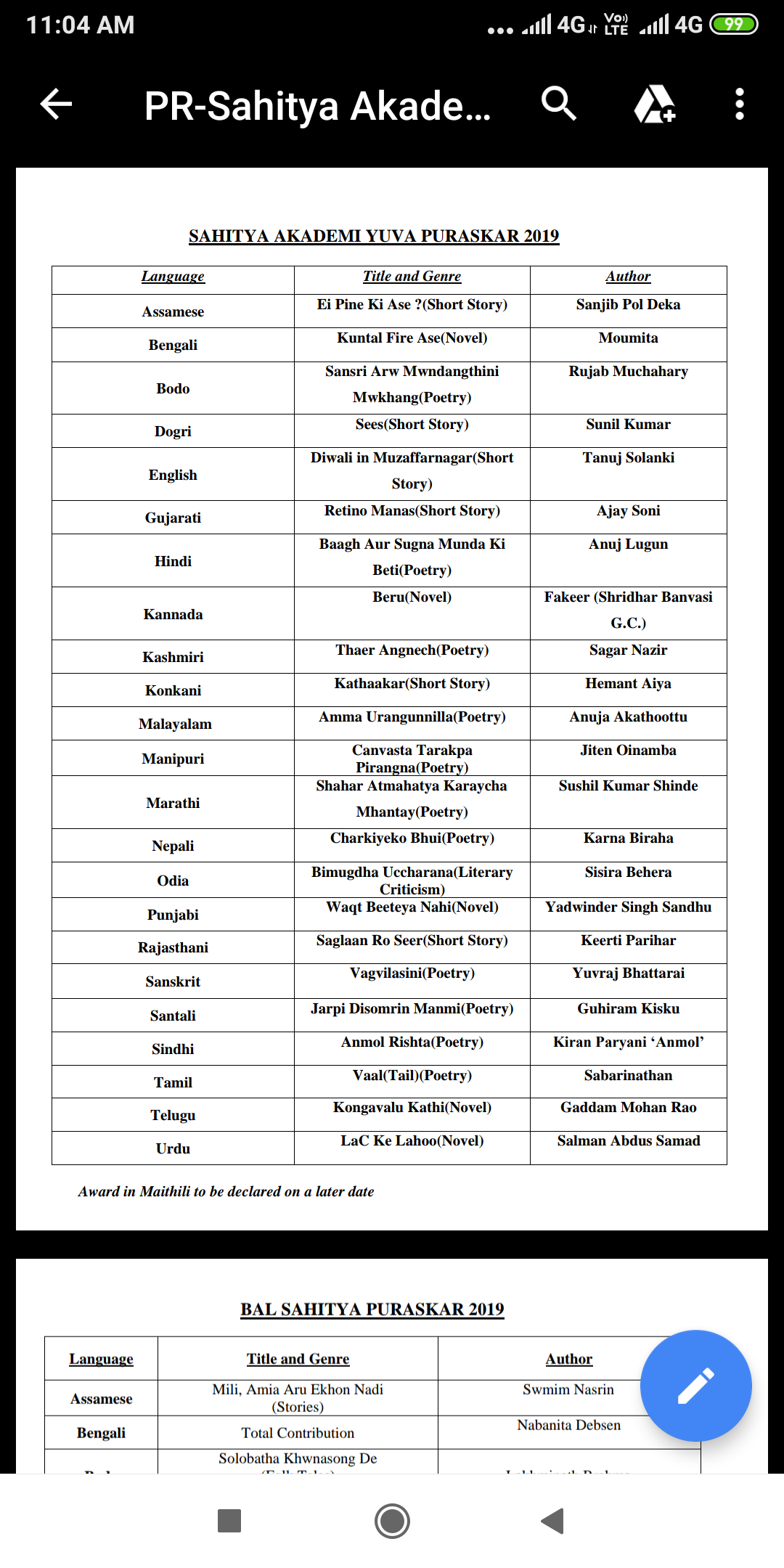 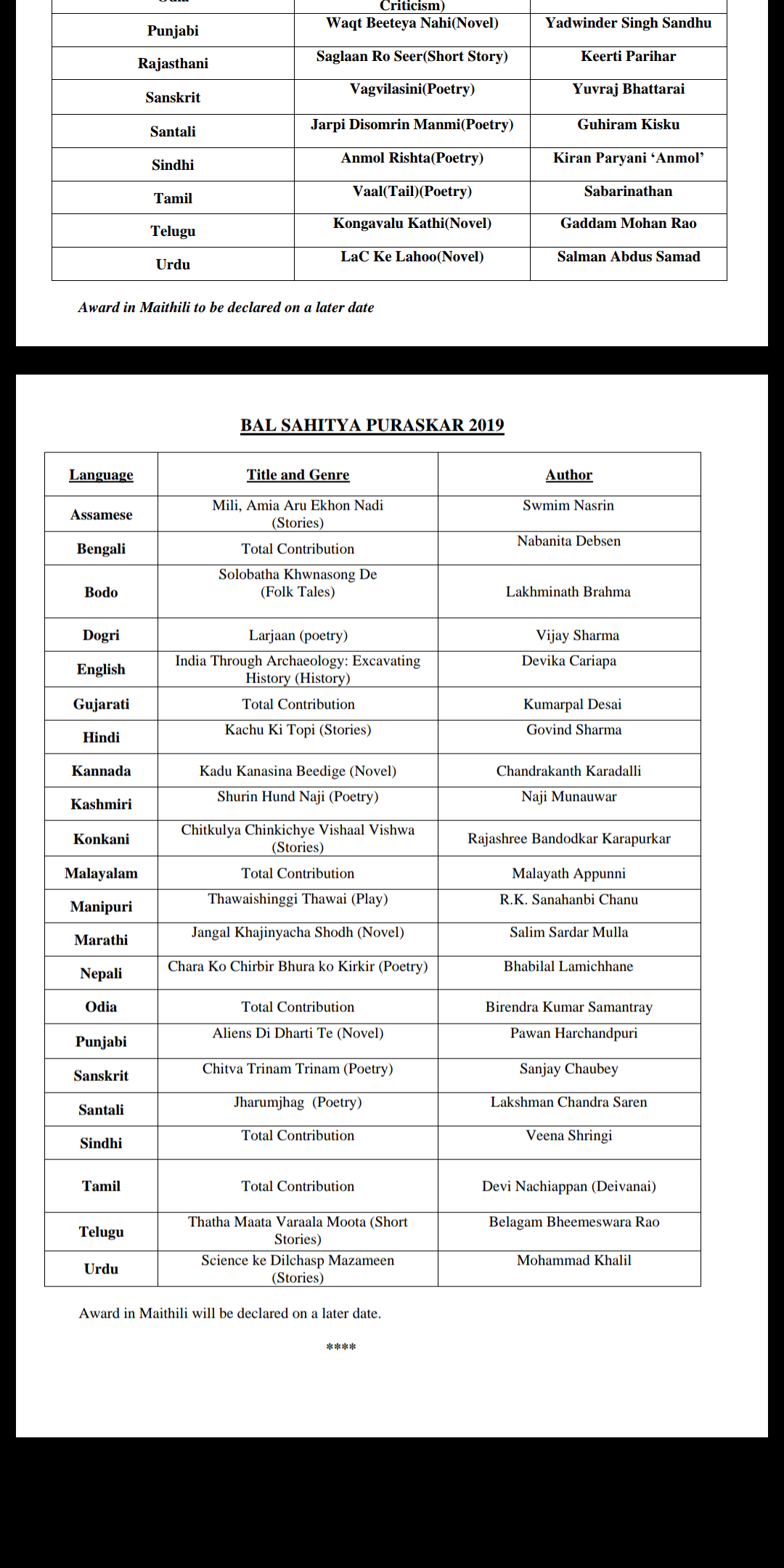 schooltimesindia Jul 8, 2022 Community, Education News, Latest News
Kurukshetra, July 08 :  “Education Financing in the States of India has a strong claim on the share in education cess of 3 per cent

schooltimesindia Apr 6, 2021 Community, Latest News
New Delhi :  The President of India, in exercise of the powers conferred by clause (2) of Article 124 of the Constitution of India, appointed

schooltimesindia May 2, 2019 Latest News, School Events, Toppers
Gurugram :  CBSE has announced the result of 12th examination on 2nd May. All the schools are analyzing the results declared by CBSE and claiming

schooltimesindia Sep 5, 2021 CSR IN EDUCATION, Discovery, Latest News
The Electronics Sector Skill Council of India (ESSCI), working under the Union Ministry of Skill Development and Entrepreneurship, will now provide skill training to the

schooltimesindia Jul 4, 2019 Latest News, Vacancies
New Delhi : Giving boost to employment, the Human Resource Development Ministry has cleared the way for appointment of more than 7000 Teachers and other