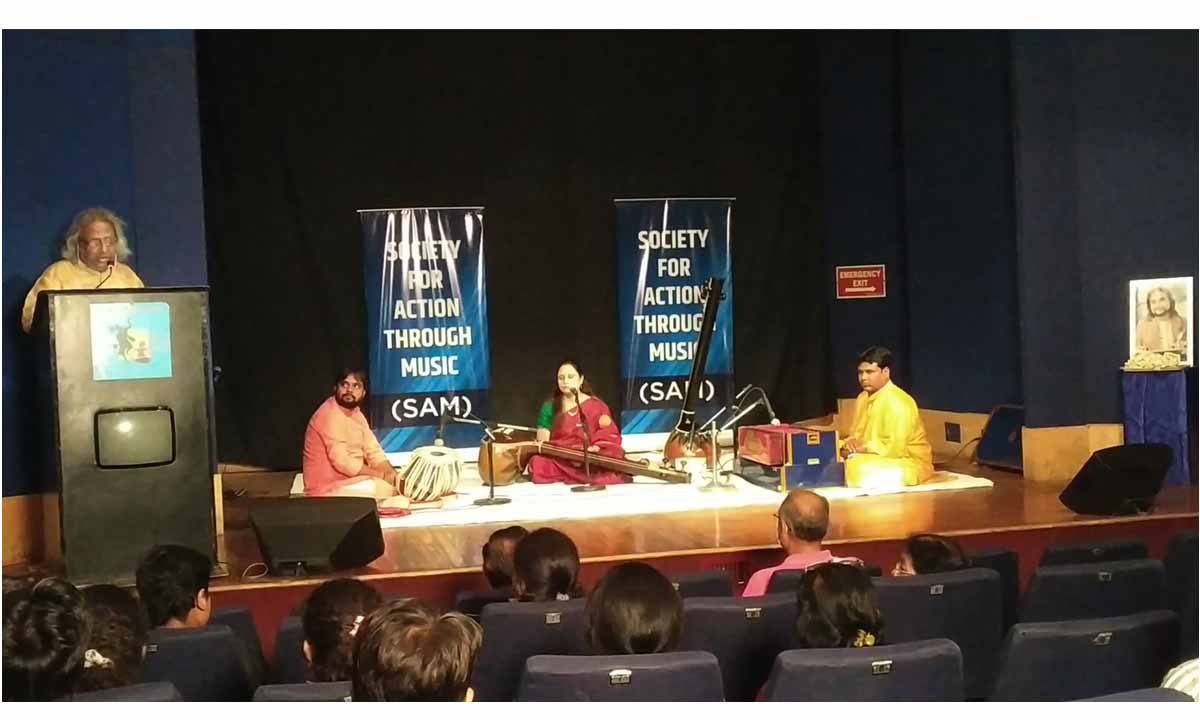 -Many famous and budding artists performed and overwhelmed the audience

New Delhi : Society for Action Through Music, New Delhi, and Sangeet Nayak Pandit Dargahi Mishra Sangeet Akademi, Gurugram organized a two-day classical music program in the memory of famous santoor player Padmashree Pandit Bhajan Sopori. In the Lok Kala Manch Auditorium, Lodhi Road, New Delhi, famous and budding artists from the field of singing, instrumental and dance paid their tribute to Pandit Sopori through their spectacular performance. Organized on 25th and 26th June 2022, the structure of this program was prepared under the direction of famous tabla player and music expert Pandit Vijay Shankar Mishra. The contribution of Pandit Sopori, who gave Santoor an incomparable fame in the national and international world in the field of classical music, was remembered through music. On the one hand the variety of devotional music, classical singing, independent tabla playing, vocals, dance and Kathak dance acting overwhelmed the audience, while on the other hand, the literature of saint poets of India wrote a succinct letter on music introduced people to the classicalness of music and dance hidden in the music. All the artists were honored by presenting them with letters of appreciation and shawls.

On the first day of the program, Pandit Dargahi Mishra National Symposium was started with devotional music. In this, Ujjwal Mishra, Poonam Rani, Pankaj Kumar, Dhirendra Pratap Singh and Abhishek Yadav enthralled the audience with their captivating performances of devotional music. Ms. Palak Bhale enthralled the audience with her classical dance performance while classical music singer Sneh Lata Mishra’s singing remained focused. Pandit Jaishankar Mishra, Zakir Dholpuri, Swaroop Choubey and Aryan Bhale made the program wonderful with their association with all the artists as co-stars. On this occasion, special guests Mahendra Prasad Sharma and Kalpana Sharma honored all the artists.

The second day based on classical music i.e. Pandit Dargahi Mishra Sangeet Samaroh started with paying homage to the portrait of the great Santoor player Pandit Bhajan Sopori. The vast experience of the famous tabla player Pandit Vijay Shankar Mishra, the facilitator of this two-day event, tried to give a new dimension to the music festival. Under his efforts, the second day of the event was completely drenched in singing and dancing. Pandit Ravindra Mishra, a renowned critic of classical music, and senior journalist Suvash Chaudhary were also present on this occasion as special guests . All the artists were felicitated by the special guests Pandit Ravindra Mishra. On this occasion both special guests were also felicitated.

Classical music singer Nitika Juneja started her singing with Raga Gorakh Kalyan Puri. She began her performance Hey Re Mai Aaj Piya Nahi Aaye…. based on Teen Taal While her performance ended in Mirabai’s famous bhajan Mai Mhari Hari Ji Na Poochi Baat…….. This hymn has been composed by Mrs. Juneja herself. Her singing was well liked by the audience. She was accompanied by famous tabla player Arun Kumar and Zakir Dholpuri on harmonium. It is noteworthy that Nitika Juneja, the head of the music department at Ramagya School, received her early education in music from her father, Pandit Haridas Juneja, and later received her discipleship from Dr. Vijayshree Manorkar. At present, she is taking classical singing lessons from a famous classical music singer of Rampur Sahaswan Gharana, Padma Bhushan, Dr. Sanno Khurana.

On this occasion, the independent tabla playing of child tabla player Rudraksh Srivastava, who registered his name in the Guinness Book of World Records, made an indelible impression on the hearts and minds of the listeners. Rudraksh started its presentation with Ganesh Paran, whose lyrics and playing were in great harmony on the stage. It has been composed by his father, the famous tabla player Manoj Shrivastava. Akram Khan, a sarangi player of Moradabad Gharana working in Delhi University, was seen doing melodious accompaniment with Rudraksh.

On this occasion, Rudraksh, while presenting the request of the third caste (तीसरी जाति), showed a tremendous hold on the tabla. He also explained the sound of the lyrics of the tala he presented to the audience very well, while presenting the type of the song kept the audience captive. The beat of Rudraksh on the tabla attracted thunderous applause again and again. Not only was everyone surprised by the amazing grip of this child artist, who has won 52 awards by performing on many national and international forums, but also loved ones with hope about his future.

In the music festival, classical singer Gitesh Mishra took this special occasion to greater heights by singing classical music. He started his singing with Raag Hans Dhvani whose lyrics was Aiso Nithoor Shyam….  . After this he meditated on Nishi din tera dhyan dharu …. Sakal Jagat Ke Palanhara…..Bandish was sung while his last rendition of Bandish/Tarana also got tremendous applause from the audience. The music experts and listeners present in the auditorium were astonished by his natural ability. All India Radio’s A category approved artist Shri Mishra has spread his singing skills in many prestigious forums in the country and abroad. The classical singer, who has won many prestigious honours, performed brilliantly in the Lok kala Manch of the true nature of Hindustani music. He also holds the world record for singing 111 Hindustani ragas in 2 hours 14 minutes only .

He was accompanied by famous tabla player Manoj Shrivastava on the tabla while Zakir Dholpuri was doing the accompaniment on the harmonium. On Tanpure he was supported by co-stars Ujjwal and Gaurav.

The melodious evening culminated with the dance performance of Kathak by Bhushan Mau Mala Nayak, expressing gratitude to the renowned santoor player Padmashree Pandit Bhajan Sopori for his incomparable contribution to the world of classical music. The famous Kathak dancer Mau Mala depicted the Indian culture through her dance through the expressions of the compositions of the universal and all-time saint poets who have always been immersed in devotional rasa. The unique experiment of proving the classical relationship of devotion with dance was seen before the music lovers on this occasion.

Sangeet Natak Akademi Delhi ICCR’s approved artist Mau Mala Nayak composed the famous book Vinay Patrika of Sant Tulsidas, Ganapati Vandana, Shri Ramchandra Kripalu Bhajaman Haran Bhava Bhaya Darunam, composed for Lord Shri Ram, Bhaj Mana Ram Charan Sukhadai, Raghuvar Tumko Meri Laj and  Jaagiye Raghunath…… gave a beautiful lecture by threading the hymn in dance. She displayed expressions of emotion on many major works of the devotee poet Sant Surdas, while one of the main works of Sant Kabir Das was Ghunghat Ke Pat Khol Re Tohe Piya Milenge…. the message that awakens human beings for self-realization contained in … was placed among the audience through dance. She also threw light on the works of Meerabai, which took the culmination of Krishna devotion. Her effort got a memorable applause from the people.

Addressing the sangeet ceremony, Pandit Vijay Shankar Mishra, founder of Society for Action Through Music, New Delhi, Sanstha and Sangeet Nayak Pandit Dargahi Mishra Sangeet Academy, Gurugram, highlighted the importance of music. While doing a comparative analysis of western music and Indian music, he said that there is a big difference between the two.

Pandit Vijay Shankar, who authored several important books on all genres of classical music, said that music directors in western music allow singing on the basis of their composition, whereas in Indian classical music, a two-line raga is used by singers for singing a long periods of time to prove their ability . The limit of Hindustani music is like the sky, which is also considered to be an accurate means of spiritual progress. He said that it is unfortunate that today the sponsored music event has captured the original form of Hindustani music. He said that his organization’s best efforts are to take Hindustani music to the present and future generations. He called upon all the fans of Hindustani music to help in this.

Education without ethics is like eyes without sight : Prof Madan Mohan Goel

Education without ethics is like eyes without sight : Prof Madan Mohan Goel